In this article we'll cover:

Disclosure: I’m always looking for things I think my readers will value. This article contains some affilate links to products that I have used and found helpful. If you purchase these, then I may see a share of the revenue. This comes at no extra cost to you.

What is Quick Sort?

Quick Sort takes in some data, puts it in order, then spits it out.

Quick Sort is an in-place, unstable, and comparison-type algorithm.

What’s an in-place algorithm? Here’s Wikipedia’s answer: “an algorithm which transforms input using no auxiliary data structure. However, a small amount of extra storage space is allowed for auxiliary variables.”

In simple terms, it usually just means that the input is overwritten (via swapping or replacement) by the output as the algorithm executes. The advantage of in-place algorithms is that they take up less space in memory.

Unstable means that two elements with equal values can appear in different order in the sorted output compared with their order in the unsorted input array.

For example, if we wanted to sort:

into alphabetical order by first letter, the output could be:

As you can see, the relative order of “Blackberries” and “Bananas” changed – this wouldn’t be possible if we used a stable algorithm like Insertion Sort.

For an example showing why it's important to know the stability of an algorithm, check out Important Algorithm Concepts | Algorithm Stability, In-place Algorithms, and Comparison Algorithms.

And finally, a comparison sort is a sorting algorithm that only reads the list of elements through a single abstract comparison operation (usually a “less than” or “equal to”) that determines which of the two elements should occur first in the final sorted output array.

Since Quick Sort is one of the less intuitive sorting algorithms, we will go over each step slowly to make things easy to follow. If it doesn’t quite make sense after the first run-through, then go over it again and it should begin to sink in – at least that’s what I found. Stick with it!

Before we go over all of the steps, here’s is an overview of how Quick Sort works: 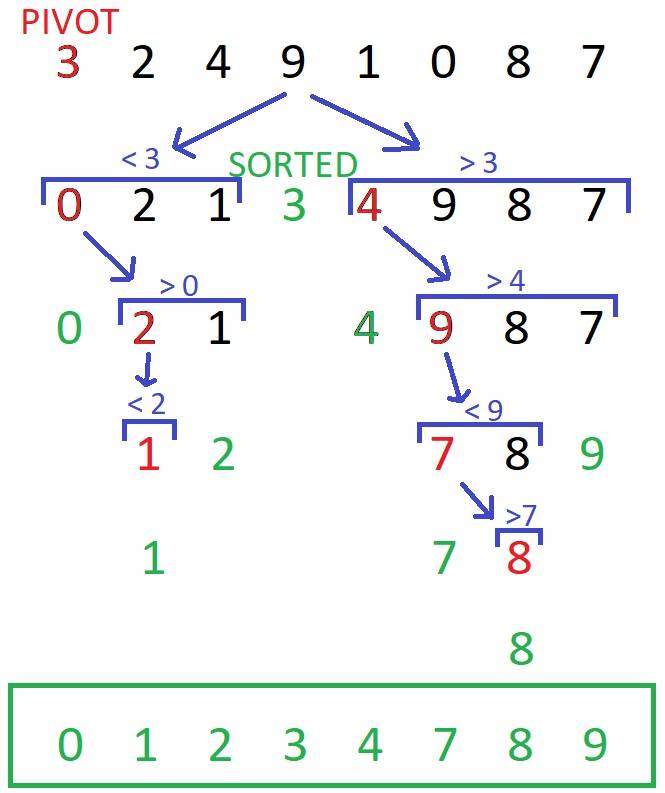 There is then a left sub-array, [0, 2, 1], and a right sub-array, [4, 9, 8, 7]. We now need to sort these arrays. The pivot is chosen to be the first element of each array. This process is repeated until the left and right sub-arrays are sorted and each number is in its correct place.

Don’t worry if you don’t quite get it, we will now go over Quick Sort step-by-step – things will become clearer!

First, we need to implement a “partition” helper function:

Now we can implement Quick Sort using recursion. In this quicksort function, we will:

First the left side of the array is sorted with recursive calls, then the right side is sorted recursively.

I’d strongly suggest going over all of this in debugging mode; it is not the easiest of algorithms to get your head around – it took me a while, but you'll get there if you go over each step slowly!

What is the time complexity of Quick Sort?

We'll be discussing performance in terms of Big O Notation. If you haven't covered Big O before, or need a refresher, check out this article: Big O Notation in JavaScript | The Ultimate Beginners Guide with Examples

The best-case time complexity of Quick Sort is of O(nlog(n)).

The log(n) comes from the number of decompositions (divisions into subarrays) that have to be done. Then we have O(n) comparisons per decomposition.

The worst-case time complexity of Quick Sort is of O(n^2).

The worst case is when we have a sorted array and we start from the smallest or largest value; this requires n decompositions, and with n comparisons per decomposition, this results in O(n^2). So, the Big O of Quick Sort is n^2 – quadratic time complexity.

To prevent this worst case, it is best to pick a middle or random value when selecting the pivot. The first (as in this example) or last element of the array are often chosen for simplicity.

The space complexity of Quick Sort

The space complexity of Quick Sort is of O(log(n)).

This is due to the number of recursive calls of the Quick Sort function that have to be stored on the call-stack.

Does this mean that Merge Sort is better? No, because Quick Sort’s worst case is very rare, provided the pivot is chosen at random or to be in the middle.

Also, the runtimes of sorting algorithms usually only refer to the number of swaps and comparisons necessary to sort the data - independent of computer architecture. However, other factors - such as locality of reference (do we read lots of elements from cache rather than from memory) - can play an important role.

Does this mean that Quick Sort is better? No! In fact, there are many considerations that are beyond the scope of this article. For example, Merge Sort is quicker when dealing with linked lists. There are also different tweaks that can be made to Quick Sort to make it better suited to given situations.

Summary: it’s probably best to try them both out and see which performs best. And of course, if your only sorting small data sets, then it isn’t going to matter too much which sorting algorithm you choose.

If you Want to Master Algorithms...

If you want to further your knowledge of algorithms and data structures, check out: JavaScript Algorithms and Data Structures Masterclass by Colt Steele. It’s the best Udemy course I’ve ever taken 👌.

If you enjoyed this article, you can say thanks by subscribing to my YouTube channel or by signing up to my blog to be notified of new posts 🙏

Also, feel free to connect with me on Twitter!

Enjoyed this article? Check out these...

Searching and Sorting Algorithms in JavaScript | The Ultimate Guide

In this article we'll define important algorithm concepts, and go through the logic and performance of Linear and Binary Search, as well as six important sorting algorithms in JavaScript.

How to Setup TailwindCSS with HTML

How to setup TailwindCSS with a simple HTML project.

Affiliate disclosure: As an Amazon Associate, we may earn commissions from qualifying purchases from Amazon.com.